One of the strongest lessons that we’ve learned has been about direction – as in, what direction we are headed. I say it’s a lesson we’ve “learned,” but it’s probably more accurate to say we’re “learning,” because it’s a lesson we need to be reminded of over and over again.

A few years ago, we were invited to present a series of weekend services at Westhaven Baptist in Portsmouth, Virginia. Since we were working together for the weekend, Tanya and I learned a few songs and skits to use as part of our presentation. One of those skits was “The Wind of the Spirit” from Paul and Nicole Johnson’s SelectScripts. It’s a silly skit with a simple but powerful message. In it, two sailors are planning to set off in a sailboat, but one never wants to leave the dock. He’s too afraid of what might happen if the wind catches their sails and takes them somewhere unexpected.

Sometimes we hold onto our own expectations and ideas about what God wants from us… and those expectations tether us to the dock. We’re so bound by our own plans that we completely miss what God is doing somewhere else. We’ve seen instances when God’s Spirit has blown us in certain directions – to particular unexpected relationships, for example – and seen that God’s plans were much bigger than the ones we were holding onto.

After all, things have not really gone according to our plans. Here are a few of the biggest examples… 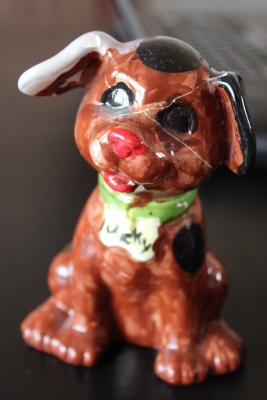 If we only focused on these and other disappointments, we’d be in sad shape indeed… in fact, we probably would be back in the U.S. by now. But we learned an important lesson through these events – and we adopted this mascot (image right) to remind us of that lesson.

Just before we moved here in summer 2012, the girls made some projects at a do-it-yourself pottery shop in Louisville. Abigail’s project was Lucky, a dog-shaped penny-bank. We wrapped their projects carefully for the move overseas, and buried them deep inside a trunk where we thought they’d be safe. Sadly, we didn’t account for TSA. Kaitlyn’s mug made it here intact, but Lucky did not. His head was broken in several places when we arrived. We used super glue to put him together, but not all the pieces could be salvaged. Lucky doesn’t look like we expected him to look when we arrived.

But even though Lucky looks different, he’s still Lucky. It’s likely that if Lucky made it here intact, he’d probably be packed away in a keepsakes box by now. Instead, he can still hold pennies, and he makes a powerful object reminder in our living room. Lucky reminds us that even though our expectations are often broken, and things rarely end up the way we plan or hope, we can still roll with the changes and see what God’s doing. Without fail, we see that God’s workings end up better than we could have planned.

For instance, let’s look at the outcomes of the disappointments mentioned above:

We can make our plans, but God’s Spirit is always working in surprising ways. If we are willing to go with the wind, to let our plans be broken and re-formed, we’ll see that God’s way was better all along. It’s a lesson we have to be reminded of often, but one we’re becoming more sensitive to each time.

How have you learned to deal with your own disappointments and changed plans? How have you seen God at work when you were busy making other plans? May God give all of us the courage to let the wind of the Spirit take us to unexpected – but wonderful – places!