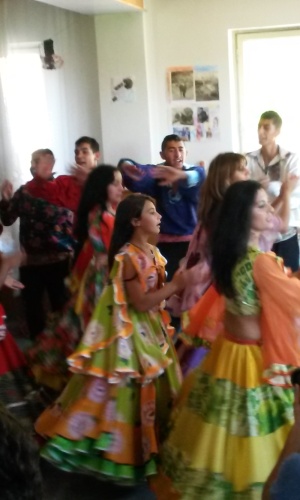 This past weekend we received an invitation to a tiny place called Potoky, about an hour north of Kosice.  The event was an open house for a two-week “summer school” being held there, at a secluded camp area tucked into the hills of northeastern Slovakia.  What we found there amazed us.

The camp, called Romano Drom (“The Roma Way” in the Roma language) is held each summer in Eastern Slovakia.  About 60 Roma young people attend, chosen for their talents in music and dance.  If you’ve followed our story or learned much about the Roma, you know that music and artistic expression run deep in Roma culture… it’s in their blood, a part of who they are.  This camp seeks to highlight and develop these cultural gifts, bringing in professional musicians from around the world.

The camp attendees are surrounded by their peers, guided by seasoned musicians, and immersed in Roma music and art.  They are given lessons and training in their specific area – singing, playing, dancing, etc.  At the end of the camp they perform together as a group, and later in the year they gather again to travel and perform.

The camp is sponsored by an Czech organization called International Initiative for the Development of Ethnic Art (its Czech acronym is MIRET), and led by a charismatic and talented woman named Ida Kealrova.  Since 1999, Ms. Kealrova and MIRET have been holding these camps for Roma children and youth from Slovakia, Hungary and Czech Republic.

That’s a lot of information… but the real story is what happens at these camps.  Many of these kids come from very poor villages – and yet here, they are equals, valued not because they have money but because they represent the creative beauty of their people.  They form a community, laughing and singing together during breaks, cheering one another on as they perform, correcting each other when someone steps out of line.  The camp strengthens their abilities, but it also builds their character… and gives them something to be proud of.

Even though this is not an explicitly Christian event, the “choir” often sings Gospel and religious songs.  Besides that, we recognize that our ability to create is a gift from the Creator, so we celebrate with these students who, maybe unwittingly, are reflecting the beauty of our Creator!

We were so pleased to be able to spend the afternoon with these talented kids and to learn more about MIRET and Romano Drom.  If you want to learn more information, visit their website by clicking here.  Below see some images from our time visiting at the camp.