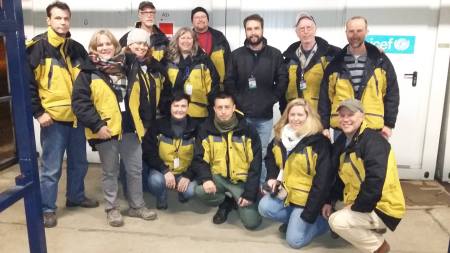 Some of you might have seen pictures and tags of me (Jon) on Facebook the last few days, while I was in Croatia. Only a couple of weeks ago we learned a group of Virginia Baptists (mostly from First Baptist Richmond) were coming to Osijek to work at a refugee camp/center. Because we have a flexible schedule, and because Tanya was willing to help make it happen, I was able to join that team for a few days over the weekend while they worked at a refugee center near the border of Bosnia/Serbia/Croatia.

I have lots of impressions from my time there, so many stories, and I’m afraid my schedule these next few days will make it difficult to get them all in writing. But I want to try, because the stories of these refugees – AND of the people trying to help them – need to be told from more perspectives than just the media.

So I’ll begin by giving you an overview of what’s happening at this camp, what we did there. Then in future posts I’ll share some impressions and stories that were powerful to me. Finally, I’ll hope to share some ways you can be involved in their ongoing stories, wherever you are.

So here’s the lowdown, in Q&A format.

We were at the newly-built Winter Transit Center in Croatia. It’s just outside the town of Slavonski Brod, on the border of Croatia and Bosnia. Another camp, farther east, had been open for several months. But that camp was not suitable for the winter months. This new camp has heavy tents, heated spaces, and the capacity (so far) to hold around 10,000 people in transit from one place to another. 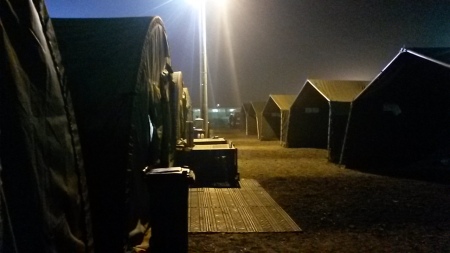 Basically, this is just a layover camp on the “refugee railroad.” The refugees and immigrants arrive on trains, they are registered and offered help in various ways – clothing, blankets, food and water, a place to rest. They will stay for up to 24 hours and then move on to the next stop on the “railroad.” They’re not staying here permanently, they’re just stretching their legs and getting some help.

Where are these people from?

We talked with people from Syria, Iran, Iraq, Afghanistan and other countries in that region. Some were fleeing from war and crisis situations. Others are joining the mass migration, taking the opportunity to move out of hard or hopeless situations.

Who runs the camp, and who’s working there?

The center is run by the Croatian government, and is jointly operated by the Croatian army and police forces. There is a constant presence of policemen and soldiers, administrating things and keeping order. Beyond this, there are volunteers from many organizations – Croatian Red Cross, Caritas, Samaritan’s Purse, UNICEF, Croatian Baptists (yay!), Jesuit Refugee Services, among others. Finally there are many people, unconnected to an organization, who just show up to help in any way they can. From what I could see, there are around 150-200 police and volunteers during the daylight hours, and around 100 at night.

What work is being done?

Beyond the basic process of registering the refugees and immigrants and moving them from place to place, there are people helping them off the trains, translating into different languages, giving out clothes, handing out bags of food, cleaning the tents and trains, and simply offering smiles and whatever is needed.

What were things like there, what was the mood?

Generally positive. I didn’t get to have much personal interaction with the refugees and immigrants, but the ones I saw and talked to seemed exhausted (many have been on the move for weeks) but hopeful about the future. They are of course nervous – they’re hearing reports that some countries are putting up fences.  Even if they ARE accepted, most have no idea what to expect in their new home. Many of them are from places that are warm most of the year, so they’re already beginning to experience the deep cold of central Europe.

There’s fear. Fear you’re going to miss the train. Fear that at the next stop you might be told you can’t go farther. Because of this there’s a constant drive to keep going – pushing, quick and anxious steps, constant looking around.  What if you miss this train and the border is closed tomorrow?

One fear – and it’s a valid fear – is being separated from their families. For practical reasons, during the process at each stop along the railroad, the men are separated from the women and children. At this camp they were doing their best to reunite families, but we saw several men who were asking anxiously about their wives and children.  What if they get on the train and I don’t get on with them?  How will we ever find each other again?

Among the police there was a lot of anxiety – they are hearing stories of riots and unrest at other camps, and they know they will have to deal with that if it starts here. So while the refugees were present, the police were tense, brusque and intimidating – if you look like you’re mean and in charge, you can keep others in line. In between the arrivals of refugees, the police were letting off steam – laughing together, enjoying coffee and a smoke. But the tension was always present.

Who should I be proud of?

You probably didn’t ask this question, but you should!  There are so many people working to respond to this unexpected and difficult situation, and you want to thank God for these people:

And I’m personally proud of Tanya, who gave up a lot of her plans and mobility this weekend so I could go and participate.

That’s enough for now… later some stories and impressions. In the meantime, here are some links and articles about this center and about the refugee crisis: