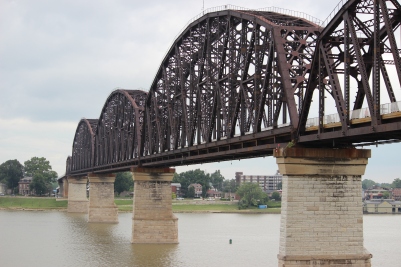 Some people are bridge people. This summer when we were speaking in churches, we talked about our friend Jerry (name changed). Jerry is a bridge person. Jerry is a social worker in a small primarily Roma village. He is Roma, but he had Slovak friends and he works to try to help his own Roma people get out of poverty. A couple of weeks ago, I was teaching a group that consisted primarily of social workers. I was talking to them about how I see them as bridge people.

A Slovak social worker who works primarily with the Roma in her village.
A young Slovak teenager who has both Slovak and Roma friends.
A young Roma man who is the first in his village to go to University.
A Roma man who feels called to work with the young people at his church.

As I talked with them about this role, I could see their eyes light up. “Yeah, that’s right. That is what I am.” They hadn’t noticed it before. They were just doing what they felt like God had called them to do. They were just doing their ‘job.’ But, they are doing so much more than that. They are building bridges between two cultures, they are building bridges between two ideas, and they are very often building a bridge so that people can understand God.

What about you? How are you a bridge person? How are you allowing God to use you to build bridges between people, between ideas, and maybe even toward God? Our world is so full of ideals and hatred and “I’m right,” I fear we are growing farther and farther apart. How can you build a bridge today? Fear doesn’t build bridges. Love does.